Why I Teach Short Story 4

By emperor
0 Comments
Blog, Why I Teach 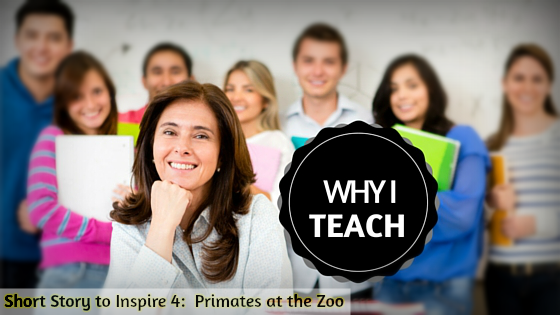 Story 4: Primates at the Zoo
A Short Short Story to Inspire

The bus pulled up to the front of the zoo entrance and Zach Burton’s third grade class began to file out.
“Over here, guys!” Zach called out as he motioned them over to the front gate.

They each made their way through the gate and then Zach tried to corral them at the bronze lion statue that greeted them just inside.

“OK, we’ve got a lot to see and a fun day ahead. But there are some rules,” Zach continued.

“What’s the first rule?” Bobby asked, from atop the bronze statue.

“That would be… no climbing on the statues,” Zach said, giving Bobby a little wink.

“Gotcha, Mr. Burton,” Bobby replied, as he hopped back down off the lion with a frown.

Zach continued, “the others are: stay with the group, listen to the adults, and don’t feed your classmates to the bears. That means you, Tim.”

Tim smiled. “But what if the bears are hungry and Amy just happens to be next to them?”

The group made their way toward the primate area and a place called monkey island. They stopped to check out the action as a dozen monkeys were swinging, wrestling, hollering, and jumping from place to place.

“Why does this seem vaguely familiar?” Zach thought to himself, replaying some of these same from his classroom on any given day.

They stayed there for a little while and then moved on toward the giraffes. There was a baby giraffe walking around with some larger ones.

“Does anyone know how tall a baby giraffe is when it’s born?” Zach asked his students.

Bobby chimed in. “Umm…taller than David. Though, that wouldn’t be too hard.” He turned and smiled at the shorter David, who returned the favor by chasing after him.

Zach snagged Bobby as he tried to run past.

“No, the answer is six feet…” Zach replied. “The minimum distance I need boys named Bobby to stay away from classmates that they can’t help but instigate.”