Why I Teach Short Story 2

By Teacher One Stop
0 Comments
Blog, Why I Teach 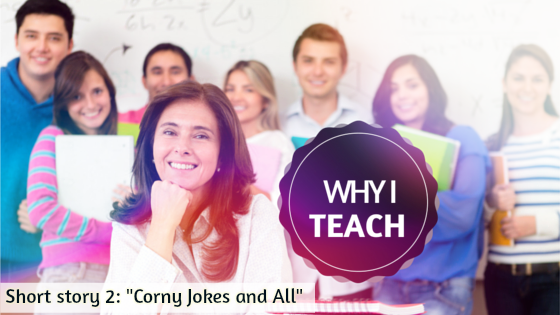 Story 2: Corny Jokes and All
A Short Short Story to Inspire

The students filed into Brad Power’s seventh grade English class. He was just about to close the door when one last straggler came around the corner.
“Glad you could make it Mr. Miller,” Brad said with a grin, as he patted Dylan on his backpack. “It wouldn’t be the same without you.”

“I’ve got good news…and bad news,” he told the class.

“I’ve graded your tests,” he continued.

“Is that the good news or bad?” Joey asked sarcastically from the side row.

“For you Joey…” Brad said, glancing at Joey’s test. “That would be the bad news.”
The class laughed as Joey’s smirk turned to a scowl.

Brad began passing out each of the tests. On Dylan’s, with a big red F on top, he had written “please see me after class.”
Dylan took a look at his test and ripped it up.

“This is so dumb!” he cried out. “Why do we even have to learn this stuff?”

Dylan needed help, but Brad was fresh out of answers.

The period flew by and then the bell rang and students began to disperse.

Dylan was trying to sneak out when Brad stopped him.

“Dylan,” Brad said. “We’ve got to figure out how to get these grades turned around.

“I can’t,” Dylan shot back. “I’m just dumb and there’s nothing you can do about it.”

“Who told you that?” Brad replied.

“Would you be willing to stop in here after school for a little bit each day to work on it together?”
Dylan just stood there for a moment. It was the first time Brad had seen hope in his eyes.

“Yeah,” Dylan finally replied. “I guess we can try it. On one condition.”

“Please no corny jokes after school. I get enough of them during class.”

“Got it,” Brad replied, and smiled.